Soulitude is a New England musical acoustic duo, comprised of Andi Hall on lead vocals and Dave Lieb on guitar and backup vocals. Available to entertain for both public venues and private events, Soulitude offers a colorful setlist of over 40 songs, performing soulful harmonies with a hint of attitude, as they cover R&B, pop and rock classics with a unique acoustic style.

With a wide range of favorites that include Stevie Wonder, Elvis Presley, the Doobie Brothers, Gordon Lightfoot, Ike & Tina Turner, Rolling Stones, Beatles and many more, Soulitude has something for everyone’s enjoyment. 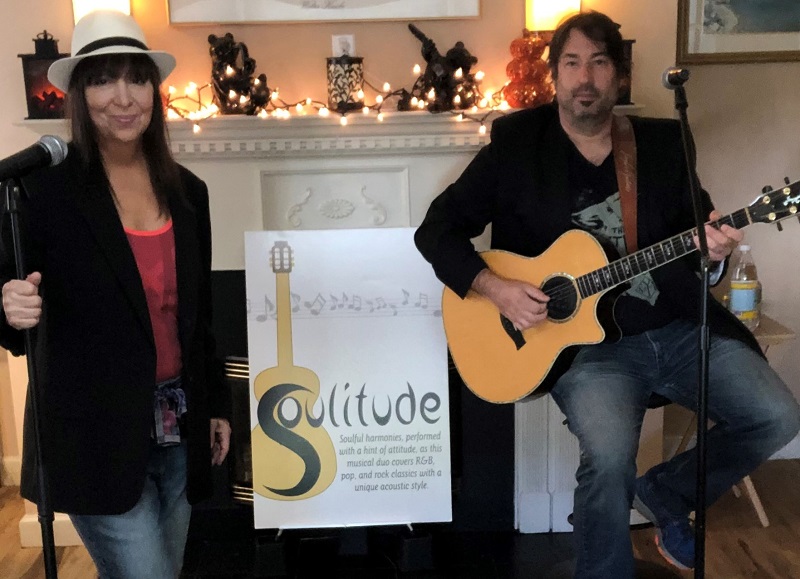 A native Bostonian, Andi was raised in Brookline, Mass by a mom who was a theater major, so culture and the arts were always a part of her lifestyle. Heading to NYC to see Broadway shows was on the agenda twice a year as a child through her college years, and she feels fortunate to have witnessed so much live entertainment, growing up.

As early as 4th grade, Andi’s vocal ability was noticed by her music teacher, as she was quickly cast as Dorothy in the Wizard of Oz, happily belting every note in ‘Somewhere Over the Rainbow’.  It was then that Andi found her ‘sound’.  She continued to be booked for various school events and graduations in her hometown, whenever they needed entertainment.

Andi recalls being swayed by the smooth vocals of David Cassidy, Kenny Loggins and the group Chicago, as a pre-teen.
With her strong alto vocals, in high school, she auditioned and was then selected as a member of the musical choral group, ‘The Greater Bostonians’, who toured regionally. This choral group crooned out pop songs, which included a concert at the Hatch Shell and a TV special filmed at Symphony Hall in Boston. She credits her high school music teacher, Roy Kelley with igniting her flame for singing.

In later years, Andi gravitated more toward r&b and soul, spending hours in her room listening to and wearing out LPs by Earth, Wind & Fire, Chaka Khan, early Prince and Al Green. A 1984 Boston University graduate, Andi later worked within the music and media industry for decades, navigating around music, but putting the emphasis on her vocal ability in her back pocket.

Currently enjoying her role as lead vocalist in the musical duo, Soulitude, she is loving performing again and is able to focus on her passion for singing, with a hand-selected repertoire of songs she had tucked into her ‘favorites’ list.

The name Soulitude is derived from Andi having two thoughts:  One is an obvious reference to a feeling of ‘solitude’.  The other emphasis is a bit more playful:
Soul + Attitude = SOULITUDE

Dave was born and raised in Northern New Jersey. Music was an integral part of his home life, because his mom was a music teacher and classical pianist and bassist. His early influences range from Beethoven, Chopin, Mozart to the Beatles, Yes, Genesis & the Who. He was drawn to ’70’s rock and pop.

In high school, Dave gravitated more toward Jazz and Jazz/Rock, leaning toward groups such as Chicago, Steely Dan and even the old Motown and Stax soul sound.  A graduate of Berklee College of Music in ’91, Dave is a virtuoso at the following instruments: piano/keyboards, guitars, bass, and drums.  He also performs solo gigs around the country and chimes in with a mix of lead and back-up vocals in many of his music projects.  Past and current ‘original music’ bands Dave has played in include: Scott Damgaard/Stained Glass Eye, The Rudds, The Peasants, The Rationales, Vinyl Skyway, Lonely Leesa & the Lost Cowboys, The Eye Captain, Shiverlane and Tom Baker & Double Down.

Dave continues to be one of the busiest professional working musicians in New England!

Audio Podcast 12/13/22:  Our lively Soulitude interview with John and Mark of ‘Musicians and Beyond’.  Includes live acoustic performances at the WinCam studios.

Soulitude on ‘musicians and beyond’ podcast filmed at WinCam studios. Dec. 2022

Soulitude getting jolly for the Cabot’s birthday!

Soulitude at the Off Cabot in a spook-tacular performance!

Soulitude mixes it up for the hometown crowd at the Village Social Club!

Bringing on the good cheer at Hopothecary Ales Brewery, July 2022.

Book Soulitude now! Available for all public venues, restaurants, bars and festivals.  Reserve Soulitude for your entertainment at your private event, party and celebration. 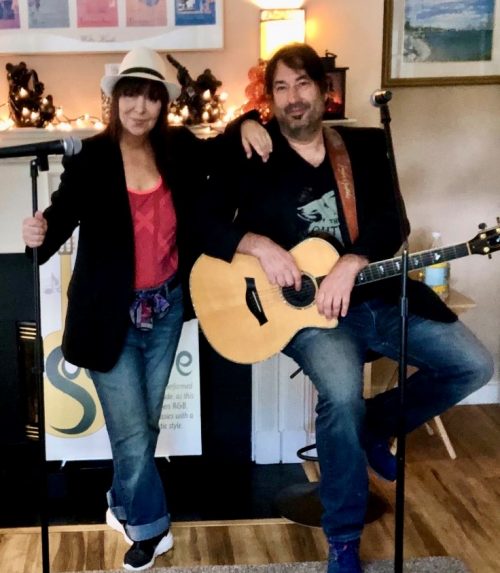 Join our email list and we’ll send you an email whenever we are playing a public event. Your email is safe with us. We will never share it. Hope to see you soon! 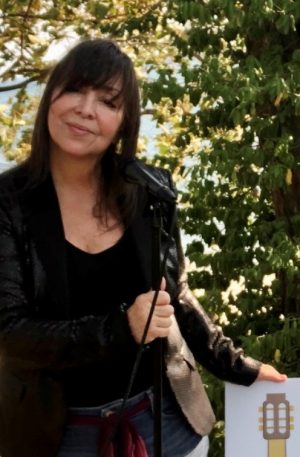 The first time I heard Soulitude, I was transported by Andi’s gorgeous vocals – the soul, the warmth, the genuine vibe, combined with Dave’s on-the-money guitar playing with backing vocals that capture the energy of the eras they cover that stay true to the songs but are distinctly Soulitude at the same time. The combination of both their talent results in a fun, entertaining, and captivating show! I can’t wait to see them again!

What an amazing duo! Andrea’s soulful voice and the sounds of the acoustic guitar, blend beautifully. True artists and a great song list! I hope to see Soulitude again soon!

Don’t miss a chance to see Soulitude. A guaranteed fun night out. You’ll know the words to EVERY song they sing!! Dave’s guitar playing is perfection and Andrea’s voice is amazing!

I absolutely love Soulitude! Andis voice…it’s so sultry , smooth & soulful! Their choice of songs… impeccable! Dave’s acoustics and back up vocals complete the package! I can’t wait to see them again!

I love Soulitude! Andi’s vocals are beautifully relaxing and David is an amazing guitarist. Their set list from all decades is great – you’ll know every song they play!
The two of them sound phenomenal together.

Andi Hall’s warm, hypnotic and enveloping voice will touch your soul. And Dave Leib’s wonder guitar playing and background vocals make the duo sound like a full band! These two great performers will take you on a musical joy ride through the 60’s, 70’s, 80’s, right up to now, triggering wonderful musical memories of special times in our lives. If you catch this great duo, you’ll certainly leave on a happy note!

Andi’s voice and stage presence is warm and pleasing. It is quite obvious to me that music is indeed her passion. The quality of Dave’s guitar playing clearly comes from years of training and his passion for music as well.  Kudos to both!